After a tumultuous experience in the music industry, Kim Ho almost quit music entirely. He took time to recharge, pursue other interests, and ultimately it led him back to writing music.

Kim’s solo music project, Apollo Lovely combines the old school soul and R&B that Kim loved as a young kid with the pop sensibility of his previous band, Creature. The self-titled album Apollo Lovely is the cool older brother – smoother, and just a little more laid back. The music has an upbeat and sultry swagger that is perhaps a reflection of Kim’s new found confidence and freedom as an independent artist.

The latest single, “Catch Me,” is about a cat and mouse relationship that is not necessarily healthy, but both people are still not able to end the relationship.

Kim explains: “This song is about a person I was seeing several years ago. She was a bit of a princess and was used to always getting everything she wanted. I was never really committed to the relationship and would often remind her of our ‘it’s not serious’ status, but that would only make her want me more. And the more she wanted me, the more I pushed her away.”

“When recording the song, I thought of a cat,” said Kim. “A cat will often come close to you to be pet, but stay just at the edge of your reach. So I sang it with a teasing and aloof delivery. I was trying to give the song a coy and playful feeling.” 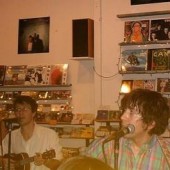